this guide is no longer valid. 2/10 static sites have been removed.

A short guide to roaming for fights and making ISK along the way.


This is aimed at the Angel Creo-Corp Mining 2/10 complexes that are found in Metropolis, Molden Heath and Heimatar regions. These are Deadspace Complexes that are a permanent static fixture in space and require no probing, they are entered via an acceleration gate and consist of three rooms.


We will take a look at how to run them and how to get fights in them. 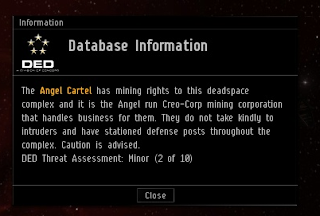 So you're out hunting and it happens to be quiet in space. These complexes can drop faction loot that sells for a tidy sum on the open market, so why not run them to earn yourself some extra ISK? Seems like a simple idea and in fact, running them is as simple as it could possibly be. You can run them in a t1 frigate, a destroyer or a tech 2 frigate and best of all it only takes about 10 minutes to blitz the site. Personally I would recommend an assault frigate for simple blitzing or a t1 frigate with an active tank. Thrashers are also popular choices and a lot of people also run these sites in faction frigates, the Dramiel being a popular ship choice. 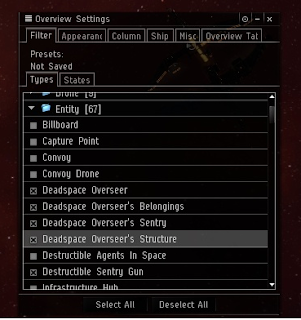 Warp to the acceleration gate and activate it. I would recommend warping to the gate at 10, as you will then reduce the risk of bouncing off the gate and you will be able to immediately activate the gate as you land. You could also warp at up to 100 if you want to have a look if anybody is lurking on the gate first. 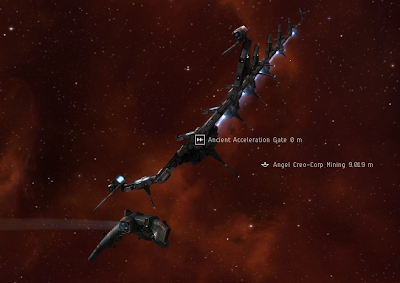 It is worth noting at this point that deadspace gate warp mechanics will prevent fleet mates warping directly to one another if they are at range of the gate. Use this to your advantage if looking for a fight and you suspect a gang is ready as backup. If you are fighting at 130 off of the gate for example and your enemy calls in backup to 'warp to him' then they will always land at zero on the gate. A lot of people fail to understand this mechanic, often blaming it on glitches when really they are just misinformed.

Once you land on grid you will be able to see straight away if the complex is live and ready to be run. You are looking for the Deadspace Overseer's Structure, if this is on your overview then the complex is ready for you to run.

You will notice that all the NPC rats will begin to aggro you, ignore them. You do not need to shoot any of these rats. Just the structure needs to be destroyed, as this drops the key (Creo-Synchronization Pass)  for the next room.

Once the structure is destroyed a cargo container will drop, loot this and scoop all the contents.

You now have the key for the next room.


Now activate the ancient acceleration gate and do the same as above (blitz the structure, ignore rats, take the loot). 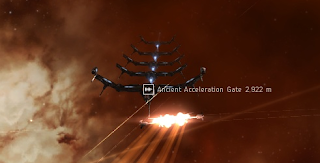 Once looted head on over to the next ancient acceleration gate and activate.


You are now in the final room and once you clear the structure a cargo container will, following a bright explosion, (hopefully) drop your loot and your reward. 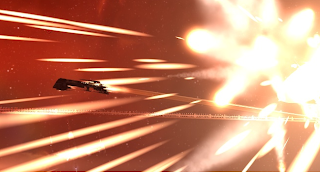 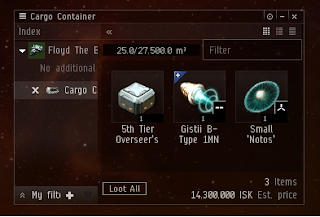 I say hopefully because there is a random chance that you will not get any nice loot at all. It is very much a lottery, but for what takes you approximately ten minutes to blitz you might as well buy a ticket. If you are lucky, most commonly you will get 1 Gistii item, although it is also possible to drop 2 faction items and it has happened before where 2 faction items drop AND a blueprint or Domination item. If this happens then you have just struck the jackpot on the 2/10 fruit machine. 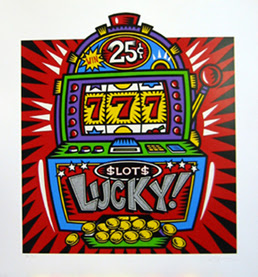 
With each cargo can you loot you will also pick up various Overseer's Personal Effects which can be handed in for isk at various stations across the cluster. Most notably via NPC buy orders at DED and CONCORD stations. 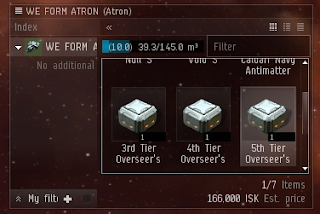 It is worth noting that the structure in the first room respawns approximately every 1 hour 30 minutes. Some players camp in the final room, which spawns every 45 minutes. I wouldn't recommend this personally as you not only become a slave to chasing the loot drops, you will also be looked on as an annoying gamer dood who nobody respects and everybody wants to pod.


When you do come across somebody camping the final room it can be frustrating, some players like to save the keys or buy them off the market and they will then surprise the campers in the final room.


Apart from the chance to make some ISK as you roam, these 2/10 complexes are a fantastic place to engineer fights. Only frigate and destroyer sized hulls can enter these complexes and this greatly favours the lone hunter or very small gang pilots.

Simply loitering in these systems will get you fights.

I would say it is a 50/50 split between pilots who hunt in and around these complexes who are actively looking for a fight and those who are not looking for the fight, i.e looking to just farm the faction loot drops. This makes for a good hunting playground and because of this, usually you will find pilots who loiter at the gate simply looking for a fight with like-minded pilots, the gate acting as a pvp beacon for any pilot who happens to be passing and spots him and then narrows him down on a 5 degree scan.


These complexes really are great for finding fights, as we mentioned above, you will find the regular plex runner and those who genuinely do wish to fight. Obviously this should not stop you from engaging them all regardless of what they are doing there.

As you begin to get used to what generally visits the complexes that you frequent you will get a better picture of what ships and fits to use. Destroyers are popular ships used by those fighting and running the plex, in this instance fighting fire with fire is always a good option and destroyer versus destroyer fights can be rewarding fights.

I would also give a shout out to the assault frigate here. A popular visitor to these complexes, and a ship that can hold its own versus anything it might come up against, be that another assault frigate, faction frigate or destroyer.

You will often see tech one frigates in and around the complexes, whenever I see a t1 frigate I will always try and ship down if I have a hull in the area. It isn't that much of an achievement if you gank a Rifter in your Wolf.

So where exactly are all these complexes? This is a roam I regularly enjoy. I don't always complete it, of course, but I like to try. This roam should also give you an idea of where these complexes are and what to expect from the locals.


This roam starts in the Molden Heath region. I will visit the plex in Heild and then visit the one in Hrober, a dead-end system two jumps out of Heild. Both plexes usually offer up the chance of some pvp if the locals are home.

From here I will roam up towards the Istodard pocket where the complexes of Altbrard and Hedaleolfarber await. Extra caution is advised when visiting this pocket as sometimes you will find the odd gate camp blocking your way.

Next up we make the trip over to the high-sec protected systems of Erstet and Enden. Often off the radar to most players with negative security status, however, these two systems are easily accessible via 3 highsec jumps that rarely trouble a frigate or destroyer. The two systems are themselves sandwiched between a 0.5 system but this is not a problem. With insta-undocks this 0.5 system of Nein can make for an excellent refuelling and spares outpost. The apparent safety of high-sec also makes for some interesting targets in this area of space.

After spending time in Metropolis I will make my way back onto the low-sec trail and then in to the Heimatar region where we visit the plex in Bogelek and then Gusandall. This area is usually another good area for picking a fight.

Next stop is the system of Ragnarg which is in the Hagilur pocket, another haunt for local pvpers you will no doubt find a fight if you stay for long enough.

From here we make the trip down towards our final two systems of Lulm and Olfeim, which are very close to Amamake. It is always worth checking on the in-game map and with killboard activities before taking this final leg of the trip if the gatecamp is active in the Eszur chokepoint. If so I will usually just bolt across high-sec or repeat back on myself up towards Erstet and Enden and then bolt across high-sec towards the Bosboger area.

This is one of my favourite roams. You will not only take in the systems with the plexes but there is also scope for extending your roam by visiting such places as Eifer, Hagilur pocket, the Molden Heath loop, Hadozeko area, Evati, Amamake and many other good hunting systems.

This roam covers eleven 2/10 complexes and if you strike it lucky in each of them and live to tell the tale then you can expect a nice pay day once you ship your loot to market. A couple of months ago I had stashed many, many items from doing this roam over a few month period (or at least chunks of it) and after deciding to cash-in came away with a cool couple of billion isk.

Not a bad return to say I was just roaming around looking for fights and running the odd plex when it was live.