Next up in my series of roaming guides takes us from the fabled system of Old Man Star and down into Verge Vendor to the small arena-style-combat system of Ouelletta. The roam is relatively small, consisting of nine main systems that we will be exploring as well as three separate off-shoot systems that are always worth a peek into. We will be traversing space that is frequented by a mix of pirates, mission runners, faction warfare pilots and the untrained ratter.

So, without further delay, jump into your frigates, hit that undock button and warm up your warp scramblers! 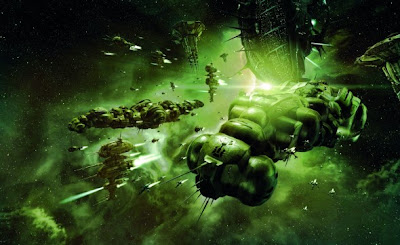 For most capsuleers the system of Old Man Star needs little introduction. A system steeped in history and intrigue it draws pilots towards it like a beacon of glorious light. Most are drawn towards the promise of combat and the opportunity to make their fortune and to establish themselves as a name in a world of battered ship hulls and cut-throats. Others are brought here in the ongoing war between the Gallente and Caldari nations, to fight for their Militia in great fleets of military prowess. Some who come here perhaps overlook these factors and underestimate the volatility of Old Man Star. It can be volatile.

The system was formerly known as Ouperia, the rich history of how it got its name can be found here and is well worth a read.

Old Man Star borders the high-security system of Villore, traffic is usually heavy and for those wishing to test their mettle, should find an abundance of targets to tussle with. The system has 13 asteroid belts in various clusters, scanning from your safe near the star you will be able to monitor the asteroid belts in the V, VI, VII, VIII and IX cluster.


The other belts to check are in the X and XI clusters. Warping between safe spots in these clusters should give you an overall idea of the targets available to you and the targets worth avoiding. It is also worth looking out for targets in the faction warfare complexes that might spawn during your stay in the system, care should be taken though as faction warfare pilots will more than likely have wingmen close by.

The system has a reputation as a blobbing hot-spot when the militias hit town, however this has been diluted somewhat recently as the war moves to pastures new, further afield. Numbers in the system can vary depending on the time of day and I find a good time to hunt in Old Man Star is when numbers are hovering around the 10-15 number. I think a fair average at the moment would be somewhere around the 20 point. Recently it has been reported that numbers can drop to around 5 or 6 as the system hits its off-peak times. This shouldn't discourage the hunter though, you should always be able to find a fight in Old Man Star.

The system has two stations and the market is generally poor, even for ammunitions and drones. Both stations do have repair facilities and the Senate Bureau has medical facilities available, however, it is not usually a good idea to dock up in Old Man Star as you might find yourself being camped in, emergency repairs only as a last resort.

Ladistier is a system that is usually low on active numbers and I find that it rarely peaks above 10 at the times of day that I pass through its dark skies. It does have a lot of traffic though and those in here are probably either coming or going to and from Old Man Star or docked in the luxurious surroundings of the President Bureau which offers a medical service and repair shop.

Exploring the 16 belts in the system or poking around in any complexes that are active may attract the interest of passing ships but I wouldn't spend too long in here searching for the fight.

A high-sec bordering system just off of Ladistier and Allamotte, it is always worth having a look in here for targets, numbers are usually low, however, it has 13 belts that you can investigate should somebody be home. There is no station in this system.

After you have finished in here it is back into Ladistier and then onwards to . . . .

Aeschee has always been a magnet for the mission running Capsuleer, the Sisters of Eve station in the system being one of the main reasons. These days the system usually has dedicated mission runners who live here permanently and earn their fortunes largely unopposed but for maybe a few surprise raids from local pirates. It is always worth checking the belts though as ratters can usually be left undetected by the mission runners who go about their business unaware.

16 belts to explore, including an ice field and two stations that offer good facilities including repair shops and medical bays. Not always a good idea to dock up for long periods in here though as the locals could camp you in for an easy kill.

Average pilots in space varies between 15-25 at times though it can be a busy system for passing traffic.

This system can be a good place for hunting down ratters who have jumped in from its high-sec border systems. However, it is also worth noting that because of this the system has also become an attractive base for notorious pirate types. You might get lucky and be one of a few in the system during a quiet period. If you are, keep the scanner going and warp on in for any kills should anything show up in the belts.

The four stations in the system offer all the facilities you will need although the market is generally poor, unless you are shopping for skill books, in which case the Center for Advanced Studies School should provide you with what you need.

A quick jump back into Aeschee and it is onto another off-shoot system . . .

Two high-sec borders make for a system that can at times be target-rich, ratters in belts and mission runners frequent this system, admittedly perhaps not quite as often as once upon a time. This system used to be a slaughter house and perhaps people become wise to such systems and after a time they do stop coming. However, a quick warp around the many belts should give you an idea as to whether or not blood will be spilled. Hovering around the IV cluster should see the main areas of activity covered just nice. This is still one of my favourite systems, so watch out for those none renamed frigates, destroyers and cruisers on scan! A real cat and mouse chase kind of system.

The two stations in the system offer minimal facilities and a generally poor market. The CBD Corporation Storage offering a repair facility.

Moving back towards Aeschee after hopefully snagging a few kills in Adirain should bring you nicely to . . .

Our first system in the Verge Vendor region, Jovainnon is usually a quiet system, nobody of note actually lives in this system and traffic is usually just passing through on its way to more extrovert places. It is always worth checking out the belts and any plexes that are active though just in case.

Both of the Federal Freight Storage stations offer repair facilities but little else.

Hevrice can be a dangerous place, it has a long history as a home to piracy. Currently it is the home turf of The Tuskers pirate corporation and before that Ministry of Destruction called Hevrice home. It has a high-sec border which generates traffic of various quality - mission runners, ratters and people generally taking short cuts find themselves as possible targets in the wild asteroid belts and space lanes of Hevrice.

14 asteroid belts spread over quite a large system makes for good hunting. It might be worth noting that should you linger in here for long periods the local pirate community will probably come out hunting you so be careful if they are home. You can be guaranteed a good fair fight in here though, if you are prowling in a Rifter you can probably expect another frigate to come your way, they won't blob you senseless.

Top station, Hevrice 5 - Federal Freight Storage is the Tusker base and I wouldn't really advise docking in here. Repair facilities are available in the bottom station should you need to patch up.

A station-less system that nothing much ever happens in from my experience. It rarely has any activity in its 5 asteroid belts and the only traffic in here is likely to be passing through. Your best bet for a fight might be to snag a flashy red frigate on a gate. Even then, that can be a highly dangerous pastime.

Costolle has 12 asteroid belts including one ice field, combine this with the low security rating of the system and it can be an attractive system for ratters and miners. In reality it is never highly populated, if you do find people are active in the system then warp around and hope for a juicy target.

The two stations offer excellent repair and medical facilities and the medical bays are often frequented by nearby pirate communities. A wander around the clone vats makes for an interesting spectacle should you find yourself bored one evening.

Four stations and a good number of asteroid belts but again a quiet part of the neighbourhood. Numbers remain low for most parts of the day. Again, should you find the system is active then warp around and engage anything you feel is fit for a fight.

Traffic in the system is usually passing through, with Murethand and onwards to the warfare lands of Black Rise a probable destination.

The stations offer repair facilities but there is no medical service in Melmaniel. The market is usually poor.

Our final system. A small and compact system where everything is on scan from any point in space makes for a system of no hiding and plenty of opportunity for fights. The high-sec border brings in traffic from the Gallente homelands and more often than not opportunistic ratters and miners are attracted by the chance of bounties and cargo holds full of rare ores. In reality, you are going to kill them. Hang around in here and hopefully you will be able to hunt down the unprepared or engineer a fight with somebody of similar skill to yourself. You will get a fight in here eventually. I must have lost count of how many none renamed ships I have chased around in here, this is another one of my favourite hunting systems. In fact, as I type this very sentence I have just finished slaying this unfortunate soul. 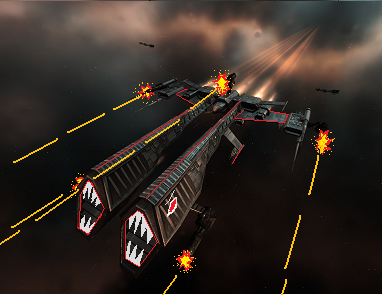 This system used to be home to elements of various different pirate organisations and traces of them still appear on some occasions. Back to Yarrr still has its headquarters based here.

The three stations offer excellent facilities as expected, medical and repair facilities are there should you need them. As with any system of this ilk I wouldn't advise spending too much time docked up in stations should the system be busy. Numbers in here average around the 10 mark but it can get busier during peak periods.

At the end of your roam, those whose security status permits can jump off into the high-sec system of Jufvitte, those of negative status can continue onwards down into Placid or trace back towards Essence or you could even make use of a jump clone service in one of the medical bays and head on home the fast way.