Above the mountain stretches a thundering velvet sky like a wicked wartorn iron armour enveloping the peaks and surrounding lowlands with its unshifting stillness as if it has been here for an age of everlasting. Snow falls as if it will never stop falling and the ice glitters in contrast to the somber blackness. The forest below keeps within its shadows a darkness that no man wishes to experience, but alluring as it is for some, only they will know what lures them. A cold wind whips with no direction or purpose and dances around like a band of screaming warhorses, and carrying with them the snow that swirls and drifts and then dies like those who themselves are on that same journey.

They say the Red Door that they speak of is just a gimmick. When they reach the peak they find not a door but a tree with stunning greenery that defies the surrounding corruption and bleakness. The warrior arrives weary and battle-scarred but a golden warmth carries him back, for if the tree is green then it is not dead and only if the tree is dead and without leaf does the Door appear. But in an act of mind-numbing disapproval in that very moment the wanderer will never really know about the tree or its green life-giving brilliance because he will already be carrying with him a heavy cold dead black heart that knows nothing about anything else but the impending death or glory that will soon greet him.

And because the tree is nearly always in flower and green, the tragic play goes full circle more often than not and in a world of thieves and wolfbrothers where violence and greed and death and betrayal are the gears of lust that drive the mechanism of desire, our warrior finds himself back where he started. And back at the beginning he dreams of a mountain that he knows nothing about.

Don't Yet Scream Thy Last Scream

The sky was clear and black above and nothing else. Bones on the floor of those who had gone before. Death came upon him and stood at his side, and he knelt there in waiting and Death gently looked down on him and snaked a bony finger atop his head and down toward the back of his neck. Such tease. Then he slept. Or was he already? He couldn't tell. 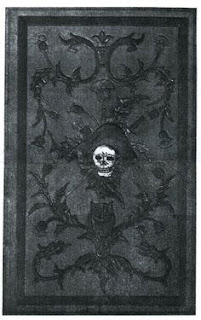 In his dreams he saw a cemetery on a hill in some land he could not recognise and the tombstones were a pale whitish-red and the names were etched a deep black but he could not read them. As the sun set, blood orange bars of light flooded the sky. Then he saw the fire and the wind chopped up and the flames licked and spat as darkness fell and horses ran wildly through the flames.

He woke with one eye. The other was still sleeping. The room was cold and black and he pulled his black jacket over him in a fashion. After a few attempts at warmth and returning to slumber he gave up, fumbled for the light controls and filled the room a sickly bright yellow that stung and poked at the back of his eyes like an unwelcome needle. In the bathroom he washed away a metallic and concrete aftertaste with a waterfall of synthetic water.

All along the station the ships went, their lights shining and blipping eerily to the backdrop of the vast ceiling of emptiness above them and he sat there and watched maybe a hundred ships come and go. Through the tunnels below him he watched them weave like little dots of insignificance, dulled by the high-reaching towers of steel and structure. He watched them with warpaint and he watched them new. The bots repaired them and the machines crushed them. As if sat atop a great cathedral he watched long into the night, the ships.

The top of the station roof buzzed and clicked and bits rattled as if the entire thing was a living creature. A mechanic walked steadily past him without acknowledgment. He inhaled deeply, filling his lungs with stale station air and he thought for a very brief moment about the fresh air of home. He looked across at a huge row of black windows, the blacklight above them casting them in a strange but appealing light and a billboard reading DANCE flashed high above. He laughed to himself and thought no not tonight.

He felt like right now at this very moment in time he had reached a crossroads and he had to make the decision. He rose from the seat on the balcony, with a slight pang thudding in his cold dead black heart, turned on his bootheels and dug them with a clink into the black metal flooring. He strode towards the elevator and smacked a leather glove hard on the button that said HANGAR, and in doing so he smiled to himself.

“Like the generations of leaves, the lives of mortal men. Now the wind scatters the old leaves across the earth, now the living timber bursts with the new buds and spring comes round again. And so with men: as one generation comes to life, another dies away.”
― Homer, The Iliad There was once a dream that was Heild

Somewhere in a New Eden chat channel, circa YC 114.

Living in the wake of the Great Frigate Revolution, all that he craved were the answers to the many questions he had buzzing around in his mind. Scraps of paper littered the desk in front of him, some seemingly no longer making any sense, mixed in with the graphs and charts and various other forms of data. To the untrained eye it probably looked like some kind of messy shorthand.

Many downtimes ago now back in July 2010, a good friend of mine, Mr Snypes, the Intergalactic Man of Leisure, penned the following words on low sec with the title 'The Burnt Lands'.

Low sec in EVE reminds me of an inner city ghetto. Kids with ski masks ganging up on someone and threatening to stick em if he doesn't give up his chain and the $5 in his wallet. Pimped out "economy" class space ships flying around because nice rides get left on a stack of bricks with nothing left but the stale air freshener you were supposed to change 5 months ago. Seedy people hanging outside the stations wearing aviators, smoking a cigarette, eyeing people up until they see someone weak enough they can take his pocket change to get themselves a cup of coffee. You all get the idea.

What is a Frigate Junkie?

A little brainstorming session in a random fashion of traits, habits and stereotypes that I think most frigate pilots will be able to relate to. Perhaps you find yourself nodding your head in agreement or disagreeing slightly. Maybe I have missed some really obvious ones or you have something else that you'd consider worthy of making the list. It would be great to hear other people's thoughts on their profession or maybe even from people who don't do frigates. It seems so long ago now when the stars first aligned and the fiery winds cut across the barren foot of a snowy Mount SKRMR back in March 2013 when only five pilots contested the first ever SKRMR World Killboard Championship, a world away from today's hectic struggle as some 21 pilots jostle for pole position each month at the top of the blood-spattered leaderboard. The Four Atrons of the Apocalypse

The Four Atrons of the Apocalypse are described in the last Book of SKRMR, called the Book of Atrons. The chapter tells of a book held in Miura's right hand that is sealed with seven seals. The Lion of Rifter (Wensley), opens the first four of the seven seals, which summons four beings that ride out on white, red, black, and pale atrons. Although some interpretations differ, in most accounts, the four riders are seen as the beginning of a new age in frigate combat and the symbolizing of Conquest, War, Famine, and Death, respectively. The Screaming Hayabusa apocalyptic vision is that the four atrons are to set a divine apocalypse upon New Eden as harbingers of the Last Judgement.

I've never quite managed to understand the mindset of pilots who habitually use link-alts in a 1v1 frigate fight environment, it's most definitely an alien concept to me. Maybe I'm just odd, or too hardcore and masochistic to feel I need those extra numbers on my side, I dunno. Now I can just about admit that okay those boosts are fine if you're one heroic mad bastard solo duder taking on a pack of let's say 5 or 6 mutant F1 pressing attack zombies. Or even a gang of 3 or 4 'elite' warriors banding together with boosts as they slay a gang of multiple hostile things turning red in orchestrated regimented barrel rolling high-octane combat situations.